WHO-certified, India , Southeast Asia were certified as a polio-free recently. Polio elimination is one of the greatest public health achievements of India. Previously India was in top three nations which are reporting polio cases, but from last few years, there has not been a single polio case in the nation. 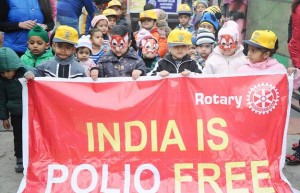 er nations in the South-East Asia region. WHO said that with this certification, the world’s 80% of the people living in accredited polio-free regions.

The press release stated an independent board of 11 health professionals from the South East Asia Regional Certification Commission for Polio Eradication assembled for 2 days to evaluate information from the nations before attaining the decision that all eleven nations of the South-East Asia area are now polio-free and have fulfilled the specifications for accreditation.

Various conditions need to be fulfilled prior to a region can be certified polio-free — a minimum of 3 years of zero confirmed cases because of indigenous wild poliovirus; outstanding laboratory-based monitoring for poliovirus; confirmed potential to detect, report, and react to imported situations of poliomyelitis; and guarantee of safe containment of polioviruses in labs .

“This is a memorable achievement for the health staff who has worked with government authorities, nongovernmental agencies, civil society and worldwide partners to eliminate polio from the South-East Asia area. It is an indication of what we can bequeath our kids when we work jointly,” reported WHO South-East Asia director, Dr Poonam Khetrapal Singh. The door-to-door activities that clinched the fight towards polio can now be applied in other vaccination programs, said Dr Poonam.

The polio-free label, on the other hand, does not indicate the end of polio vaccination. Actually, countries will now have to work in direction of launching the injectable polio vaccine and the final phasing out of oral polio vaccinations. Presently over 110 countries are using only Oral Polio Vaccine. These nations will introduce a dose of Inactivated Polio Vaccine(IPV) by the end of next year as part of their dedication to the international polio endgame plan which is designed to make sure a polio-free world in the coming 4 years,” WHO stated in press release.