Latest study reveals that gut bacteria impact cancer growth, some by enhancing it and others by restricting. However, there are no reports on which class of microbes are involved in this process. A recent study published in the Journal Immunity, reveals that two species of gut bacteria, namely Enterococcus hirae and Barnesiella intestinihominis increase the efficacy of a common chemotherapeutic drug by triggering immune cells. 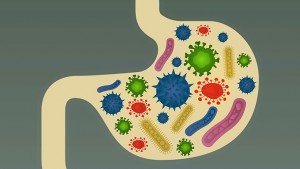 The study concerns the complex interplay of three crucial aspects related to cancer in the human body: chemotherapy, the immune system, and the gut bacteria.

Chemotherapy is a kind of cancer therapy that uses drugs to prevent or reduce the development of cancer cells, which divide in an unregulated manner. The immune system also has mechanisms for battling cancer. For example, the T cells of immune system look for cancer cells and kill them.

With the emergence of new technologies in microbiology and molecular biology, researchers are discovering that the trillions of microbes residing in and on our bodies play an essential part in health and disease.

For instance, gut bacteria not only assist to digest food, but their byproducts (metabolites) also enhance immune function and improve the lining of the gut as a better line of defence against infection.Two gut bacteria increase the effect of cyclophosphamide

In addition, they demonstrated that the immunity conferred by these bacteria promoted longer progression-free survival in sufferers with advanced lung and ovarian cancers who have undergone chemo-immunotherapy.

Dr. Chamaillard states that “the outcomes demonstrated that it may be possible to enhance the design of anticancer therapies, by either enhancing the use of antibiotics, or applying supplementation with what is known as oncomicrobiotics or their bioactive metabolites, to enhance the efficacy of anticancer medication.”

As an initial step, the study team used mouse models to examine the outcomes of the two bacteria species independently with chemotherapy.

They identified oral therapy with E. hirae activated antitumor T cell reactions in the spleen, which, together with toxic effects of the chemotherapy drug cisplatin, curbed tumor development.

They also identified similar outcomes from oral therapy with B. intestinihominis – except in that case, the bacteria spurred T cells to infiltrate tumors in different mouse models.

Moving forward from mouse models, the study team then examined blood T cell reactions from 38 sufferers with advanced lung and ovarian cancer who were given chemo-immunotherapy.

The outcomes revealed memory T cell reactions particular to E. hirae and B. intestinihominis estimated progression-free survival – that is, the period of time after therapy that sufferers live with the disease without it getting worse.

The investigators are now setting up additional research to figure out which particular bacterial metabolites or immune-modulating molecules are accountable for enhancing the effect of cyclophosphamide.

“Addressing this question may offer a way to enhance the survival of cyclophosphamide-treated cancer sufferers by supplementing them with bacterial derived drugs rather than live microorganisms.”