Two investigational Ebola vaccines seem to be safe based on assessment in more than 600 individuals in Liberia who took part in the initial stage of the Partnership for Research on Ebola Vaccines in Liberia (PREVAIL) Phase 2/3 clinical study, with respect to interim results from an independent Data and Safety Monitoring Board review. Dependent on these results, the research, which is backed by the National Institute of Allergy and Infectious Diseases (NIAID), may now move forward to Phase 3 trial. 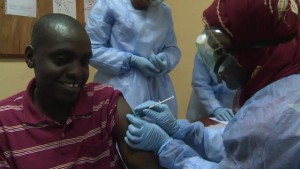 NIAID Director Anthony S. Fauci, M.D stated “We are thankful to the Liberian people who participated for this essential clinical study and motivated by the study outcomes seen with the two experimental Ebola vaccine candidates, now we need to move ahead to adapt and broaden the research so that finally we can figure out whether these investigational vaccines can shield against Ebola virus disease and consequently be used in future Ebola outbreaks.”

The PREVAIL trial, which started on Feb. 2, 2015 in Monrovia, Liberia, is evaluating the safety and efficacy of the cAd3-EBOZ candidate vaccine co-developed by GlaxoSmithKline and NIAID researchers and the VSV-ZEBOV candidate vaccine developed by the Public Health Agency of Canada and licensed to New Link Genetics Corporation and Merck. Volunteers are allocated at random to get a single injection of the NIAID/GSK (cAd3-EBOZ) vaccine, the VSV-ZEBOV vaccine, or a placebo (saline) injection. The study is also double-blinded, which means neither trial participants nor research team know whether a vaccine or placebo was provided. A randomized, double-blind, placebo-controlled research is viewed as the “gold standard” in clinical trials.

While the preliminary enrolment goal in the Phase 2 research has been met and the vaccines confirmed safe, the investigators are continuing Phase 2 research enrolment at Redemption Hospital in Monrovia, Liberia, till late April 2015. This would increase enrolment in the Phase 2 portion of the study to roughly 1,500 individuals and would be done, in part, to raise the percent of women (presently, about 16%) in the research for a more robust data set overall. The research follow-up period will be minimum one year, and two more blood samples would be obtained from all trial subjects at six and 12 months post-vaccination to identify the strength of the immune responses. These proposed modifications will be discussed with the U.S. FDA and are under review by the institutional review boards in Liberia and the United States.

Researchers planned to register 27,000 individuals in Liberia at risk of Ebola infection in the Phase 3 portion of the study. On the other hand, there has been only one new confirmed case of Ebola infection in the Liberia since Feb. 19, 2015. Given this decline in Ebola infection occurrence, the trial leaders — H. Clif ford Lane, M.D. and Liberian co-principal investigators Stephen Kennedy, M.D., and Fatorma Bolay, Ph.D. — have identified that it is scientifically appropriate to increase the trial to additional sites in other West African nations. Discussions are ongoing to explore that chance.

The Liberia–U.S. research team also planning to start a separate natural history research of Ebola survivors to better understand the after-consequences of Ebola virus disease. 4 sites in Monrovia, Liberia and locations in the United States may start registration into this research in the coming months, pending regulatory evaluation and approval. More details on this research will be presented when the trial begins.