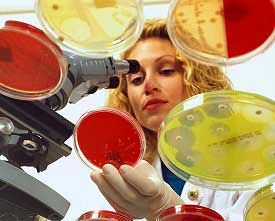 These days, hospitals are seeing an increase in the number of multiresistant bacterial strains. Through chromosomal mutations and integration of new genes either from the surrounding or from other bacteria, bacteria acquire antibiotic resistance. The results published in the open-access journal of PLoS Genetics, research teams at the Portuguese CBA research (University of Lisbon) and the Instituto Gulbenkian de Ciencia have demonstrated that the bacterium Escherichia coli (E. coli)’s ability to survive and reproduce is enhanced when both resistance mechanisms are playing out.

More often than not, the bacteria are affected by the acquisition of new genes either through plasmids or mutations: For instance, a reduction in its rate of cell division is observed. Lead author, Francisco Dionísio, uses the following analogy to describe the process: “if you disassembled your computer and randomly changed connections and pieces, you wouldn’t expect it to work better than before.”

Conversely, Francisco and his colleagues demonstrated that when a bacterium incorporating a resistance–carrying plasmid undergoes chromosomal mutations, it goes through rapid cell division as noted in 10% of the tested mutation-plasmid combinations. Likewise, a 32% increase in reproduction rate was observed in bacteria that first acquire antibiotic resistance through chromosomal mutations and then gain further resistance by plasmid insertions into their DNA.
For the first time in 2009, the same research groups indicated the significance of determining bacterial antibiotic resistance through random interactions between genes. This new study advances their initial findings by demonstrated how this general phenomenon may assist in forecasting the evolution in a bacterial population following the insertion of a plasmid that provides certain antibiotic resistance.

Francisco Dionísio adds: “These results are, at least, unexpected in light of what we previously knew about genetic interactions, and may underlie the mechanism whereby rapid resistance to antibiotics appeared.”