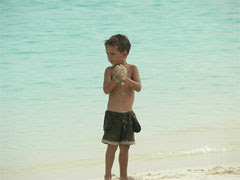 In a study published in the Journal of Pediatrics, researchers at Joslin Diabetes Center and Children’s Hospital Boston have reported that children have varying amounts of a type of “good” fat called brown fat that increases until puberty and then declines. Most often, lean children have brown fat, which burns energy in comparison to white fat that stores it.

Previously, only babies and children were believed to have brown fat. For the fist time in 2009, Cypess’ team demonstrated that adult humans also contain metabolically active brown fat. The findings published in the New England Journal of Medicine revealed that nearly 3-7.5% of adults have brown fat, and higher rates are observed in women.
In a new investigation, the PET scans of 172 children in the age group of 5-21 years at Children’s Hospital Boston were examined by researchers. Brown fat was detected in 44% of children, which was roughly the same for both boys and girls. The highest percentage of detectable brown fat and activity was seen in children between the ages of 13 to 15 years. Further, brown fat activity was found to be inversely proportional to body mass index (BMI), which implies that leaner children have the highest brown fat activity.
Contrary to the 2009 study, which demonstrated that cold weather increased brown fat activity in adults, the new study proved that weather had no impact on brown fat activity. According to authors, brown fat may have a vital role in energy balance, pediatrics metabolism, and weight regulation because brown fat activity increases from childhood to adolescence and it is conversely linked with obesity.

“We believe that the ability to non-invasively evaluate brown fat activity in vivo with PET imaging provides a better understanding of its prominent role in pediatric physiology, and may possibly provide insights into the treatment of childhood obesity,” explained first author Laura Drubach, MD, of Children’s Hospital program in Nuclear Medicine and Molecular Imaging.

According to Cypess, the primary focus is to increase brown fat activity through the identification of nonpharmacological methods like decreasing temperatures in the homes of obese children or consumption of certain foods. In the absence of these methods, the development of new drugs might be the key, he added.

A 2010 Joslin investigation demonstrated that certain cells in mice could be activated and converted into brown fat.
Cypess added, “We might be able to combat the obesity and diabetes epidemics if we find safe ways of increasing brown fat activity. This might be an additional tool in the fight. However, there are still many questions to be answered. For example, it is not known whether the relationship between BMI and brown fat is that children have more brown fat because they are thin or if having more brown fat causes children to be thin. That’s the billion dollar question, But we do know that brown fat is a core component of pediatric and likely adult metabolism.”