According to the outcomes of a recent study reported at the 2015 European Cancer, aspirin may double the possibilities of survival for sufferers with gastrointestinal cancers. 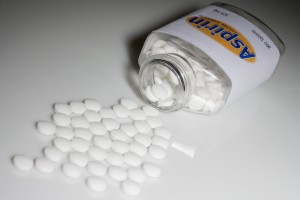 This recent study, lead by Dr. Martine Frouws, add to increasing evidence indicating aspirin might be helpful in the reduction and treatment of cancer.

Recently Clinical Research Society reported on a study indicating Aspirin Might Be Helpful in Curing Few Types of Cancers.

For their research, Dr. Frouws and colleagues set out to identify how aspirin influences the survival of sufferers with tumors in the GIT – such as the rectum, colon and esophagus. This is the first time a research has concurrently evaluated survival data by various GI locations.

The study involved 13,715 sufferers who obtained a GI cancer diagnosis in between 1998 and 2011. They were monitored for an average of 48.6 months. Of these sufferers, 42.8% suffered from colon cancer, 25.4% had rectal cancer and 10.2% suffered from cancer of the esophagus.

To identify how aspirin use following a GI cancer diagnosis influenced the overall survival of these individuals, the investigators related patient information with drug dispensing data from the PHARMO Institute in Utrecht, the Netherlands.

“In this research we assessed each individual prescription per patient, and for that reason we were able to obtain particular estimate of the influence of aspirin on cancer survival.”

This finding remained even after the team accounted for possible confounding aspects, which includes age, gender, cancer phase, cancer therapy and the existence of other medical problems.

While the actual mechanism underlying the anticancer effect of aspirin is not clear, the investigators recommend it could be down to its antiplatelet properties. They describe that circulating tumor cells (CTCs) are considered to use platelets – a element of blood – to protect themselves from the immune system. Due to the fact aspirin prevents the function of platelets; this may expose CTCs, making them open to attack.

Though the ideal dosage and length of aspirin use and its impact on GI cancers should be investigated in further research, the team thinks they have discovered a possible treatment choice that could reach a wide number of sufferers.

“Aspirin is an affordable, off-patent medicine with relatively very few side effects, this will have a good impact on health care systems along with sufferers.”

“Medical research is concentrating a lot more on personalized medicine, but several personalized therapies are costly and only helpful in small populations.

We think that our study reveals quite the opposite – it shows the significant advantage of a affordable, well-established and easily accessible medicine in a larger group of sufferers, while still targeting the therapy to a particular individual.”

The research team is now performing a randomized, placebo-controlled trial analyzing how an 80-milligram dose of aspirin impacts elderly sufferers with colon cancer.