The outcomes of two global studies performed at many trial centers globally demonstrate in a first that eltrombopag is a safe and effective therapy for children with persistent or chronic immune thrombocytopenia. Thrombocytopenia is an unusual bleeding disorder where the blood does not clot properly, because of low numbers of blood platelets. 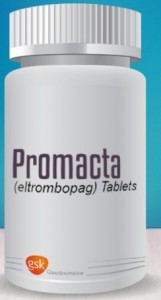 Immune thrombocytopenia (ITP) is an auto-immune condition where the immune system results in the depletion of blood platelets to such an extent that it results in bleeding within the body and under the skin. Globally 4 in every 100,000 kids develop ITP each year.

Symptoms of ITP consist of frequent nosebleeds, blood loss from the gums and bruising that seems to be as purple patches or small red spots on the skin. In rare situations, the blood loss can also cause death.

ITP can often go away on its own, but for about 1 in 4 children impacted, the situation becomes serious, and continues even following the initial therapy for a minimum of 12 months.

One of the facilities that took part in the study is the Royal Manchester Children’s Hospital in the UK. At this center the study was lead by Dr. John Grainger. According to him:

Previously, second-line therapies for kids with ITP were scarce, and one of the very first choices is to remove the spleen which holds a high risk of sepsis and thrombosis.

As scientists started to understand much more about the actual causes of ITP, immunosuppressant medication like rituximab became accessible as new therapy choices.

And more lately, thrombopoietin receptor agonists like eltrombopag have been accepted for the therapy of thrombocytopenia in adult sufferers with chronic ITP who have either not reacted or shown intolerance to other choices.

Eltrombopag performs by supporting to trigger proliferation and differentiation of bone marrow stem cells to raise production of blood platelets.

Dr. Grainger sums up the outcomes of the two studies:

“The research shows that eltrombopag is well accepted and effective, constantly stabilizing the platelet count to more than 50 X 109 per litre in about 2-6 weeks for 40% of kids receiving the therapy, in comparison with 0% on the placebo arm.”

Eltrombopag is sold as Promacta in the US and as Revolade in Europe and other nations throughout the world. As an outcome of these studies, US authorities have licensed the drug for use in kids under the age of 1 year. EU acceptance for this application is presently in progress.

The research was financed by GlaxoSmithKline (GSK). However, eltrombopag is now produced and sold by Novartis, following its latest purchase of GSK Oncology.