A fearless girl from the UK who increased awareness of a rare genetic disorder that leads to premature aging – progeria – has died aged 17. 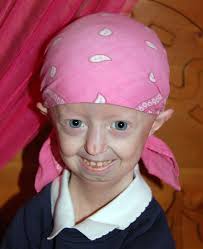 Progeria, or Hutchinson-Gilford Progeria Syndrome (HGPS), impacts about 1 in 5-8 million newborns globally. There are roughly 200-250 kids living with the problem throughout the world at any one time.

Progeria is triggered by an irregular protein in the LMNA gene, often known as progerin, which intervenes with the production of lamin A – a protein that balances a cell’s nucleus. This interruption leads to kids with progeria to age up to 10 times quicker than normal.

On 2nd April 2015 evening, it was declared that 17-year-old progeria sufferer Hayley Okines had passed away.

Hayley’s mother, Kerry Okines, posted the unhappy news on Facebook: “My baby girl has gone somewhere better. She took her last breath in my hands at 9.39 pm.”

Hayley – who BBC News say had the “body of a 104-year-old” – was being treated in the medical center for pneumonia, but she came back home soon before she passed away. “She came house for an hour and she saw her pet dogs, little brother and sister,” Hayley’s father, Mark Okines, informed BBC News on Friday.

“I think she wished to come home to say farewell to everybody,” he continued. “I feel she realized that yesterday was going to be the time.”

‘We don’t forget her incredible courage and dedication’

Kids with progeria hardly ever live past the age of 14, usually passing away from conditions that affect the elderly, like heart disease and stroke.

Hayley was informed she wouldn’t live past the age of 13, but in 2007, the girl began going through pioneering therapy at Boston Children’s Hospital, MA, as part of the initial clinical trial for the problem.

In September 2012, investigators reported on the success of this trial, exposing how a farnesyltransferase inhibitor (FTI) enhanced the weight, bone structure and cardiovascular system health of kids with progeria.

In a statement after Hayley’s death, the Progeria Research Foundation highly regarded the girl for her participation to progeria research:

“The whole PRF community mourns the loss of one of our glowing stars, Hayley Okines. Hayley was one of the initial participants in the on-going progeria clinical trials. Hayley was a pioneer – and one of the reasons that we now have the initial therapy for progeria. Today we don’t forget her exceptional courage and dedication.”

Hayley was an avid campaigner for progeria awareness, hailed locally and nationally as an motivation for individuals with and without the problem. The girl wrote two books outlining her experiences of living with progeria – “Old Before My Time” and “Young at Heart” – and took part in several interviews.

Along with for her contribution to progeria awareness and study, Hayley was incredibly admired for her positive thinking on life, writing in “Young at Heart:”

“My life with progeria is full of enjoyment and good memories. Deep inside I am no different from anyone. We are all human.”

Our thoughts and wishes are with Hayley’s family and associates at this hard time.