When HIV gets into an immune cell, it has to develop its way into the nucleus to fuse with the cell’s DNA. Most viruses wait till the cell splits to do this, but HIV is too impatient. Instead, the virus hijacks a protein and makes it expand pores in the membrane around the nucleus that the cell uses to pass components to and from the nucleus. 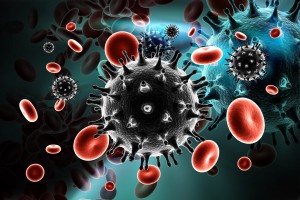 This was the primary discovery of a new study presented in the journal PLOS Pathogens by a study team from Loyola University, Chicago.

Senior author Edward M. Campbell, states that the finding could lead to new medicines to deal with HIV/AIDS.

As HIV affects and damages infected individuals’s immune cells, their protection against disease and infection weakens. The most advanced phase of infection – which can take from 2-15 years to develop – is known as AIDS.

With respect to the World Health Organization (WHO), there are about 37 million individuals living with HIV globally, and about 2 million become newly attacked annually.

HIV-1 is the predominant strain of HIV that leads to the greater part of HIV infections globally. When individuals talk about HIV, they generally mean HIV-1.

Without host cells, viruses can’t sustain on their own and multiply. They have no power source or metabolic engine of their own; they have to get into the host cell, go through its nucleus, and fuse with its DNA to take control of cell machinery to make their own proteins and reproduce.

Most viruses take the possibility to enter the nucleus when the host cell splits and the nuclear membrane or envelope – the wall that defends the nucleus and its valuable cargo of DNA – breaks down. But HIV-1 does not hang on for this; in some way, it is able to get into the nucleus of non-dividing cells. Exactly how it does this has been a secret for years.

What has been particularly baffling is that the HIV-1 capsid – the protein shell that defends the genetic substance of the virus – is some 50 % greater than the pores in the nuclear envelope. These pores generally permit proteins and other materials in the host cell to travel to and from between the nucleus and the cell body.

The finding that Prof. Campbell and colleagues make in their research surrounds a protein known as KIF5B that generally transports numerous materials within the cell away from the nucleus.

They identified that HIV-1 hijacks KIF5B and causes it to tear off pieces of the nuclear envelope and move them away from the nucleus, resulting in the pores becoming bigger to enable HIV-1 to pass through. The pieces that are torn off are proteins known as Nup358.

In cells that have no KIF5B or Nup358, the authors observe that HIV-1 access is much decreased, and the virus builds up around the outside of the nuclear envelope.

Finding could result in new drug for HIV

The team indicates the outcome could result in a new kind of anti-HIV drug that prevents KIF5B from disrupting the pores in the nuclear envelopes of host cells.

Like a drug might slow down HIV’s entry into the host cell nucleus for a longer time to give the immune system more time to damage the virus.

Cells have natural mechanisms for identifying viruses in their cytoplasm – the fluid that fills up the cell and surrounds the nucleus. But HIV-1 is capable to enter the nucleus prior to these mechanisms having time to respond.

Drug treatments that turn off the hijacking of KIF5B would trap HIV-1 in the cytoplasm. This wouldn’t only protect against infection, but also raise the chance of HIV-1 being recognized and eradicated.

“It’s like creating a bank vault tougher to break into. Additionally to making the funds more protected, it would enhance the chance of sounding the alarm and catching the burglars.”