According to recent clinical trial outcomes, Merck’s rVSV-EBOV vaccine showed to be highly effective in protecting against human infection with Ebola. This trial enrolled 5,837 subjects who obtained the rVSV-EBOV vaccine in Guinea in 2015, no Ebola cases were noted 10 days or more after vaccination, signaling 100 % protection. 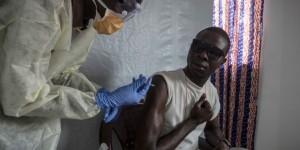 Commenting on this new innovation Marie-Paule Kieny, one of the lead researcher of this trial and a World Health Organization (WHO) assistant director-general said,

“When the next Ebola epidemic hits, we will not be defenseless”

Merck’s rVSV-EBOV has currently been used in Sierra Leone to contain a flare-up there.

The Guinea study took place in the coastal area of Basse-Guinée, which was even now experiencing new Ebola cases when the study started in 2015.

It applied a “ring vaccination” strategy, in which, when a new Ebola case was clinically diagnosed, investigators traced all individuals who might have been in recent contact and logged them as clusters, or “rings”, made up of an average of 80 individuals.

In the beginning, the clusters were allocated to get the vaccine either instantly or after a 3 week delay. After interim outcomes revealed 100 % protection in those vaccinated instantly, the trial design was modified to allow all clusters to be provided the vaccine shot immediately.

The WHO said that if Ebola outbreaks took place prior to the vaccine was given full regulatory acceptance, it could be made accessible though a compassionate use procedure after informed consent.

Commenting on outcomes John Edmunds, a professor of infectious disease modeling at the London School of Hygiene & Tropical Medicine said,

“When Ebola attacks again we will be in a lot better position to provide help to affected areas, along with protect the brave volunteers who assist control this dreadful disease,”

GAVI, the global vaccine alliance, offered $5 million earlier this year to purchase 300,000 doses of rVSV-EBOV as a stockpile for use during future Ebola episodes.