Cancer is a major cause of morbidity and death globally, and its occurrence is expected to rise in the coming decades. Cancer prevention techniques include making healthy lifestyle choices and getting examined if at risk. New study indicates that a small dose of aspirin may assist prevent the creation of cancer cells and describes how. 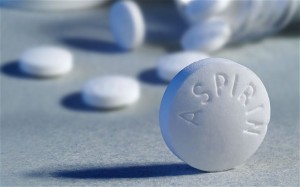 As per the World Health Organization (WHO), cancer is one of the major causes of death throughout the world, accounting for 14 million new cases and 8.2 million cancer associated deaths in 2012. It is predicted that annual cancer cases will increase from 14 million in 2012 to 22 inside the next 20 years.

In terms of prevention, the Centers for Disease Control and Prevention (CDC) suggest making healthy lifestyle and dietary choices, like avoiding tobacco and alcohol, along with staying physically active and eating a lot of fruits and vegetables.

New study supports the idea that low-dose aspirin consumption may also assist to prevent cancer and restrict the spreading of cancer cells.

However, the new study also describes the procedure by which a low dose of aspirin may certainly inhibit cancer cell proliferation and metastasis.

Aspirin indirectly inhibits oncoprotein which aids in the development of malignant cells.

The study was performed by scientists from Oregon Health and Science University (OHSU) in cooperation with Oregon State University (OSU), and the outcomes were presented in the journal AJP-Cell Physiology.

“The advantage of aspirin may be because of its effect on blood cells known as platelets, instead of acting directly on tumor cells,” says senior author Owen McCarty.

Platelets are tiny blood cells that assist a healthy body to form clots, to be able to stop the blood loss when necessary.

It appears that our blood platelets also raise the levels of a specific protein that may support cancer cells and assist them to spread. This “oncoprotein” is known as c-MYC.

The biological function of c-MYC is to control the expression of over 15 % of all the genes of the human body. The c-MYC regulator controls the life and death cycle of cells, the synthesis of proteins, and the cells’ metabolism.

However, study has revealed that in human cancers, this oncogene is overexpressed.

The investigators from this recent study describe that aspirin decreases the capability of blood platelets to increase levels of the c-MYC oncoprotein.