For some individuals, Hepatitis B is a short term condition, but for others, it can turn into a long term serious health concern and result in serious liver damage, such as cirrhosis and liver cancer. Now, a new study has discovered that the danger of liver cancer persists even after the hepatitis virus is eliminated, indicating individuals who have had the illness should be monitored on a regular basis. 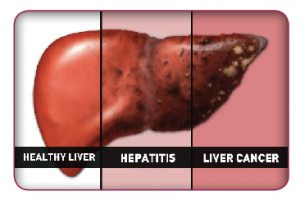 This new study is presented in the journal Alimentary Pharmacology & Therapeutics and is performed by the investigators from the Centers for Disease Control and Prevention (CDC) and the Alaska Native Tribal Health Consortium.

Hepatitis B is a liver infection triggered by the Hepatitis B virus (HBV), which propagates when body fluids from a contaminated individual enter the body of a different person, e.g. during sex, from sharing needles and other injecting devices and from mother to baby at delivery.

With respect to CDC, the danger for chronic infection with HBV is age associated; 90% of infected babies turn into chronically infected, in comparison with only 2-6% of adults.

Since 1991, when a national approach to eradicate HBV infection was launched in the US, and routine vaccination of kids was initially recommended, the rate of new HBV infections has dropped by about 82%.

The CDC calculate that in 2013, the number of individuals in the US who were recently infected with HBV was 19,764, with rates highest among adults, especially men aged 25-44 years.

But the number of people in America living with chronic infection is much greater; the CDC approximate about 700,000 to 1.4 million individuals in the US have chronic HBV infection, and a projected 2,000 to 4,000 die of the problem every year.

Worldwide, about 240 million individuals are living with chronic HBV, and an approximated 786,000 die from HBV associated liver disease every year.

Clearance of HBV seems not to decrease liver cancer risk

For their research, the investigators chose individuals from a group of 1,346 Alaska-Native sufferers with chronic HBV infection who were observed during 1982-2013.

They picked 238 sufferers whose chronic HBV infection resolved while in the follow-up and matched them to 435 sufferers who stayed infected (the controls). The sufferers were matched by age, sex and HBV strain.

The team identified that clearance of HBV appeared to make no change to the risk of developing liver cancer.

The investigators note while we do not know why HBV clearance seems not to impact the risk of liver cancer, they recommend it is probably due to a number of aspects.

One factor, for example, could be the integration of HBV DNA into the genome of liver cells, which happens early in infection, and can continue to persist even after the virus clears from the bloodstream.

The authors observe that a “significant proportion” of the cases in their research had a noticeable level of HBV DNA after antibodies towards the virus had eliminated from the bloodstream.

This increases the chance that “continuous low-level HBV DNA replication with ongoing integration” into the host liver cell leads to the persistent threat of liver cancer after the virus has been eliminated from the bloodstream.

“Since the threat of liver cancer continues among adults even with apparent cure of the infection, they may still be required to be observed closely.”