Colon cancer is one among the top killers in the US and other parts of the world. Latest research reported at the 2015 Experimental Biology Conference, revealed that consuming dried plums may help to reduce the possibility of colon cancer. 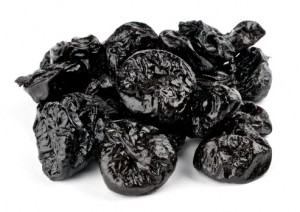 The research, performed by Dr. Nancy Turner and colleagues reveals that dried plums encourage retention of microbiota – also called as gut bacteria – in the colon, which could reduce the risk of colon cancer.

According to Dr. Turner,

There is currently proof that diet can modify the metabolism and composition of colon microbiota. There are trillions of bacteria in the intestinal tract, of which over 400 individual species have been recognized.

Disruptions to the microbiota appear to help trigger preliminary intestinal inflammation and recurrences. Repeated inflammation can enhance development of colon cancer in the long term.

Dried plums consist of phenolic compounds, which have numerous effects on human health, such as working as antioxidants that reduce the oxidant effects of free radicals, which can harm DNA.

The researchers hypothesized that taking dried plums would enhance preservation of useful microbiota and patterns of microbial metabolism in the colon, which could in turn reduce the risk of colon cancer.

They examined the impact of phenolic substances on a rat model of colon cancer. The rats were provided either a diet consisting of dried plums or a control diet.

The diets were matched up for total calories and macronutrient composition to make sure that any impact might be perfectly attributed to the dried plums. The intestinal contents and tissues from various segments of the colon were analyzed.

The team made two essential findings.

The dried plum diet plan modified the levels of the two main phyla of bacteria in the gut. In the distal colon, it enhanced the level of Bacteroidetes, but decreased the quantity of Firmicutes. However, in the proximal colon, the ratios were not affected.

In comparison, the control diet lead to a decrease in the ratio of Bacteroidetes and enhanced Firmicutes in the distal colon.

As stated by the research assistant Derek Seidel, these aberrant crypt foci are likely to be a strong indication for cancer development, being one of the earliest observable precancerous lesions.

The outcomes seem to recommend a positive role for dried plums in safeguarding against colon cancer via establishing microbiota compositions in the distal colon.

“From this research we have been able to determine that dried plums did, in fact, seem to promote preservation of useful microbiota and microbial metabolism throughout the colon, which was linked with a decreased occurrence of precancerous lesions.”

She calls for additional research, especially in human studies, to figure out if dried plums could offer a practical alternative choice to help decrease colon cancer.