One of the primary difficulties many new parents experience is shortage of sleep. But waking up on several occasions all over the night to calm a crying baby is part of the job, right? According to a new research, it doesn’t have to be; allowing a baby cry themselves to sleep may result in a better night’s rest for all parties. 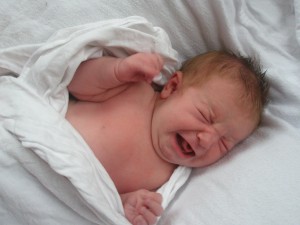 The study recommends a behavioral approach known as “graduated extinction” – which consists of allowing a baby cry till they fall asleep – can guide to extended sleep duration for the kid and their parents.

The study outcomes may come as a surprise to parents, who are probably accustomed to getting up from sleep in reaction to their infant’s persistent cries.

“It’s natural for parents to fear about having their infants cry at bed-time,” says Gradisar.

“While it’s well reported that sleep deprivation can trigger family distress, such as maternal depression, we are expecting these outcomes will add another factor to how parents view their reactions and how they handle their own and their little ones’ sleep behavior.”

The investigators performed a randomized, controlled study, which engaged 43 infants aged 6 to 16 months and their parents. All babies had been suffering from nighttime sleep issues from about the age of 6 months.

The parents of 14 of the babies were made to use the graduated extinction method for 12 months.

Also well-known as the “Ferber method,” this approach includes ignoring a child’s cries, checking on them only at particular times with raising intervals. The concept is to educate the child to accept that no one will come to their aid when they cry, which will decrease their crying and enhance their sleep.

The parents of 14 of the infants used a “gentler” method known as “bedtime fading” for 12 months. This includes progressively delaying a baby’s bedtime every night. The concept is that this will make a child drowsier and more probably to fall asleep.

The parents of the remaining 14 babies served as controls and did not use any of the sleep behavior interventions.

The investigators identified babies of parents who used the graduated extinction method fell asleep an average of 13 minutes earlier each night than those in the control group, and they awoke less often during the night.

On evaluating levels of cortisol – the “stress hormone” – from saliva samples of babies, the team identified that there were no considerable variations in stress levels among the groups.

There were also no considerable variations between the groups for parental stress and mood.

The authors observe that many parents stay worried about applying the graduated extinction approach, but their research demonstrated the method is not harmful; they identified no considerable variations between the groups for parent-child attachment or infant emotional and behavioral issues.

Babies of the parents who used the bed time fading method fell asleep an average of 10 minutes earlier each night, in comparison with the control group. However, no variations were recognized in the number of times they woke up all over the night.

Gradisar and colleagues say their results recommend that graduated extinction and bedtime fading may be advantageous for babies and their parents, although further research are needed to confirm their outcomes.

For parents who continue to have worries about using graduated extinction, they suggest trying bedtime fading initial.

“We wish parents of kids 6-16 months can become more conscious of bedtime fading which allows babies fall asleep at the start of the night.

It may not resolve awakenings while in the night so if a kid is waking up numerous times a night, then there is now some more proof that graduated extinction is a strategy that may not be dangerous to their child.”