New research shows the ill effects of depriving the gut microbes of the fiber that is required for their survival. There are around 1,000 different species of bacteria residing within our gut of which 1/3rd is common across the human population and the remaining are specific to each of us. The gut microbiota maintains our overall health by acting as a line of defense against harmful pathogens thus conferring immunity. Apart from contributing to immune health, gut microbes aid in food digestion and produce some vitamins. 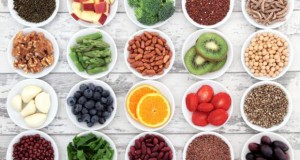 The current study led by Eric Martens and Mahesh Desai emphasizes the need of adequate intake of fiber to protect the gut from infections. They bred mice that were devoid of any gut bacteria. 14 bacterial species that commonly reside within the human gut were then transplanted into those mice. Since every bacterium has its characteristic genetic signature, it was possible to track how they evolved over time.

Infection was induced into the mice with a bacterial strain that is the equivalent of E. coli in humans. They were then divided into four study groups and each group was given diets with varying amounts of fiber, a diet with 15% fiber, prebiotic fiber and no fiber at all respectively. The scientists examined the impact of diets with different amounts of fiber and found that the infection did not spread in the group that received 15% fiber diet.

Fiber rich diet helps retain the mucus layer of the gut thus combating infections. In the absence or deprivation of fiber, gut microbes start consuming mucus and invade colon wall. The findings were published in the journal Cell.

“The lesson we understand from studying the interaction of fiber, gut microbes and the intestinal barrier system is that if you don’t supply them, they can eat you.”

“While this study was in mice, the take home message for human beings amplifies everything that physicians and nutritionists have been informing us for years: Consume a lot of fiber from different natural sources.

Your diet directly impacts your microbiota, and from there it may impact the status of your gut’s mucus layer and propensity toward disease. But it’s an open query of whether we can cure our cultural lack of fiber with some-thing more purified and easy to ingest than a lot of broccoli.”