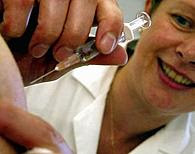 A CDC report reveals that for children aged 19-35 months, immunization rates for a vast majority of recommended preventable long-standing vaccines are either maintained or have hiked 90%.

Director of CDC’s National Center for Immunization and Respiratory Diseases, Anne Schuchat, M.D., remarked, “Today’s report is reassuring because it means that most parents are protecting their young children from diseases that can cause widespread and sometimes severe harm. We recommend vaccinations because they are one of the most effective, safest ways to keep children healthy.”

A National Immunization Survey (NIS) conducted in 2010 assessed more than 17,000 families with children born between January 2007 and July 2009. Survey results demonstrated an increase in the number of vaccinations for several vaccine-preventable diseases, such as measles, mumps and rubella, rotavirus, pneumococcal disease, hepatitis A, and Haemophilus influenza type B (Hib) compared to the previous year. Vaccinations against poliovirus, varicella (chickenpox) and the full series of hepatitis B were found to be sustained or above 90%, according to survey results.
Dr. Schuchat stated, “As recent outbreaks of measles and whooping cough have shown, vaccine-preventable diseases are still around us and it is important that health care providers, community groups, and state programs support parents in assuring that children are protected from vaccine-preventable diseases.”

Compared to other health services that still demonstrate persistent differences between Caucasians and other minorities, there was no difference in immunization rates for most vaccines either by racial or ethnic groups. In contrast, children of other racial/ethnic groups demonstrated similar increases in most vaccinations if not higher than those for white children.

According to the national survey, only 1% or fewer children have not received vaccinations despite urging those parents who prefer to omit vaccinating their children or seek exemptions.