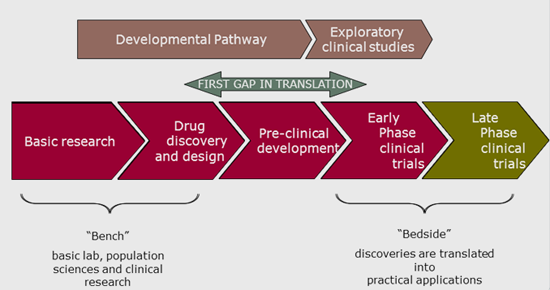 Translational Research has promised continuous enhancement of drug discovery and developmental pathway by featuring very many new arenas. It widened the scope of usual frame for thinking, with bringing a tangible view to create safe and effective environment throughout. Tools and expertise of clinical pharmacology is confronting many challenges to articulate the benefits for the ingenuous discipline called translational medicine

Translational Medicine is an emerging novel discipline and considered to be a feature of Interventional epidemiology (Ritter J M., 2009). Translational research leads its process via familiar concepts like Evidence Based Medicine and Experimental Medicine. These disciplines motions its pathway based on a two way street i.e. from Bench to Bedside and back again (though a loop). Clinical Research is an upfront outcome of this loop, while visualizing forward direction from Bench to Bedside. Implementing the reverse side of loop i.e. bedside to bench should be encouraged in a realistic manner for the continuous process enhancement. However, this part is much underappreciated by the scientific community since our understanding of human patho-physiology is still limited and also pre-clinical models have shown a discouraging propensity to fail when applied to humans (Marincola F M., 2003) (Aronson J K et al., 2008). Thus the tools and expertise of Clinical Pharmacology may confront the challenges to articulate the ingenuous discipline called Translational Medicine.

Reverse Pharmacology:It is a trans-disciplinary endeavour which addresses valuable insights in the process of drug development (Patwardhan B et al., 2008). When known drug entities are thoroughly tested; the clinical and experimental exploratory studies may reveal hits which can then be taken as leads and followed back on reverse direction on the street of bedside to bench. With high throughput screenings & leads optimisation, effective translation of new clinical entities with enhanced values can be achieved; thus providing a true picture of Translational Medicine

Currently Herbal medicinal system like Ayurveda and Siddha sciences are potentially extracting the benefits of this interdisciplinary concept of Reverse Pharmacology in revitalizing itself. With the introduction of vital tools of clinical pharmacology like biomarkers, implementing such innovative concepts has been smoother than ever. Also the impact of three major hurdles in drug development – time, money and toxicity can be minimised with lead optimisation through the use of experimental database and traditional knowledge, thus providing fast track drug discovery and development process along with improving the safer and effective use of existing blockbusters (Patwardhan B et al., 2008).

Translation Research & Clinical Trials:Keeping in view the current scenario of translational research; clinical trials are now getting remodelled in multiple facets and one such facet is Clinical Trial designs. The current adamant Phasic environment of basic four phases (I, II, III & IV) are being now remodelled into early & late phases. Phase I & II being clubbed as early phases while other being the late phases. The modern approach of bedside to bench will be lot benefited only if we address the challenges along with it. A true effective translational environment can be articulated if the change occur inmate with scientific community (Lippi G A et al., 2007). Ethics Committees/Review Boards, Regulatory bodies should be well prepared to protect the rights, safety and wellbeing of trail participant while taking a chance with such improvised models. Specifically regulators should cater the need of fast track approval in drug discovery & should have a bird’s eye view towards the developments.

Personalised Medicine:Concept of personalised medicine was known to man since thousands of years and its first existence can be seen in Ayurveda, an ancient system of herbal medicine. The Medicinal administration in Ayurveda is based on tridosha theory (of vat, pitta & cough) which depicted an individual should be advised medicine according to his/her constitution; instead therapeutically done (Ghodke Yet al., 2009)

Year 2001 bought a new dawn for this discipline of personalised medicine, with publication of sequence and initial analysis of human genome (Aronson J K et al., 2008).  Also its linkage with Pharmacogenetics and Pharmacogenomics, helped itself in getting rejuvenated (. Currently personalised medicine is practically being implemented through the scenic of translational medicine. Clinical Trials are conducted keeping in view the genetical makeup of a pollution and are so designed to adapt the variability in races concerned with such factors. E.g. Different formulation of same medicine being manufactured for different populations like Indian, Japanese & Europeans in regards to same indication.

Translational Medicine being evolved trough recent times with the advancements in multi/ trans-disciplinary concepts like reverse pharmacology and personalised medicine. The tools for revitalising such enhancement in drug discovery and development are provided by important stream like clinical pharmacology. However to widen the array of its practical application, systems should be carefully watched and revised in a tangible and effective manner.