In a novel research, adult survivors of childhood cancers who had certain chemotherapy treatments or kidney surgery treatment had poor kidney function that did not recover over time. Scientists say, this indicates that, they may be 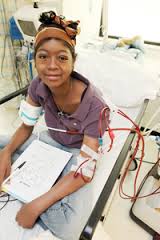 . In accordance to the Centers for Disease Control and Prevention (CDC), over 20 million individuals in the US aged 20 years or older experience from chronic renal failure.

Scientists from the Netherlands say present knowledge indicates that childhood cancer survivors have an enhanced danger for impaired kidney function next specific cancer treatments, but it has been unidentified as to whether their kidney function gets back or gets worse over time.

For their research, published in the journal Cancer Epidemiology, Biomarkers and Prevention, the scientists analyzed 1,122 adult childhood cancer survivors aged 18 or over, who visited the Late Effects of Childhood Cancer out-patient clinic, in between 1966 and 2003. All individuals were examined from 5 to 42 years subsequent to a diagnosis and therapy for cancer.

The scientists examined the effects of a wide range of chemotherapy medicines thought to cause kidney harm over time. They also viewed at the consequences of kidney-damaging therapies, such as radiation treatment to the kidney region and nephrectomy – partial or complete surgical removal of the kidney.

Additionally, childhood cancer survivors who were handled with high doses of cisplastin demonstrated the highest rate of deterioration in their kidney function. The research authors note that these outcomes recommend that glomerular function become worse in the early years following cancer therapy and failed to restore. Since glomerular function has revealed continued destruction, they say childhood cancer survivors may be at greater threat of early chronic kidney disease. Renée Mulder, research associate of the Department of Pediatric Oncology says:

“We identified that the kidney functionality of childhood cancer survivors handled with nephrotoxic treatment [treatments known to damage the kidneys] decreases very soon after therapy and does not restore.

Health care providers and survivors should be knowledgeable of the enhanced threat of early kidney damage after nephrotoxic therapy for childhood cancer, because these sufferers are also at enhanced risk for developing comorbidities, such as cardiovascular disease.”