Human immune system is the first line of defense against harmful pathogens and, thanks to some amazing biological weapons, it saves us again and again from various illnesses. Among the footsoldiers on this front line are the neutrophils. These common white blood cells can set up a toxin-laden net made of their own DNA that functions like a spider’s web to trap and kill invaders like bacteria and yeast. Now, a new research reveals how cancer cells hijack these DNA nets – potentially using them to perforate tissue so they can move through the body. 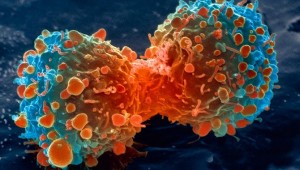 In the journal Science Translational Medicine, researchers from Cold Spring Harbor Laboratory (CSHL) and the Dana-Farber Cancer Institute, demonstrated how they used electron microscopy to  image how cancer cells hijack DNA nets, and how they experimented with approaches to  overcome this process in mice.

Neutrophils are a group of white blood cells that are among the first to confront possible enemies. , firstly they try to engulf them up and digest them.  However, some pathogens can get around this, so neutrophils have a different weapon at their disposal. They can set up toxin-studded nets – named neutrophil extracellular traps, or NETs – to trap and kill the pathogen.

The NET is ejected from an activated neutrophil when the neutrophil detects a threat. It is a lattice made of the white blood cell’s own DNA studded with small toxic enzymes that chemically attack and digest the trapped pathogen.

This study is carried out by associate Prof. Mikala Egeblad used live-imaging technology to assess how cancer cells hijack NETs to promote their ability to spread. They used a mouse model of triple-negative breast cancer – a cancer well-known to be most aggressive in human beings, and notorious for spreading and relapsing. The authors note in their paper:

Although  the  exact mechanisms  involved in the process remains unclear, the  researchers  believe the makeup of the NETs  enables cancer cells migrate  through tissue by literally  engulfing through the protein-scaffolding that forms the tissue framework. They suggest the NETs create small holes and crevices for the cancer cells, thus helping to promote new colonies away from the primary tumor.

Prof. Mikala Egeblad comments the remarkable thing we noticed in live imaging was the ability of the cancer cells to induce nearby neutrophils to eject their NETs even when no infection or invader was present. Our studies showed that the NETs, in such scenarios, can promote metastasis.”