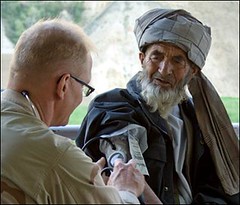 A report published in the forthcoming September issue of Infection Control and Hospital Epidemiology reveals that high rates of multidrug-resistant (MDR) bacteria are seen in Afghan patients treated at US military hospitals in Afghanistan.

The study findings suggest that there is a pressing need to deploy effective infection control measures at hospitals catering to both soldiers and local patients.

The research team was led by Air Force Lieutenant Colonel Deena Sutter of the San Antonio Military Medical Center. The one-year study of Afghan and US patients admitted at the military hospital at Bagram Air Base revealed that 113 of 1071 Afghans receiving care had MDR bacteria in contrast with only 14 of 765 US personnel.

Another aspect of grave concern is that most Afghan patients had the hard-to-treat infections caused by “Gram negative” bacteria.

A part of the US military hospitals mission in Afghanistan involves the treatment of Afghan veterans and local civilians injured in combat operations. With the availability space and resources, primary care also provided to civilians.

Researchers write, “The rates of recovery of [Gram negative and MDR bacteria] in the local Afghan population cared for at our facility were quite high, exceeding those of civilian patients reported from the Iraqi combat theater.”

To conclude, researchers say that “the practice of good infection control is essential,” as local Afghans containing high MDR colonization rates are treated together with US personnel.